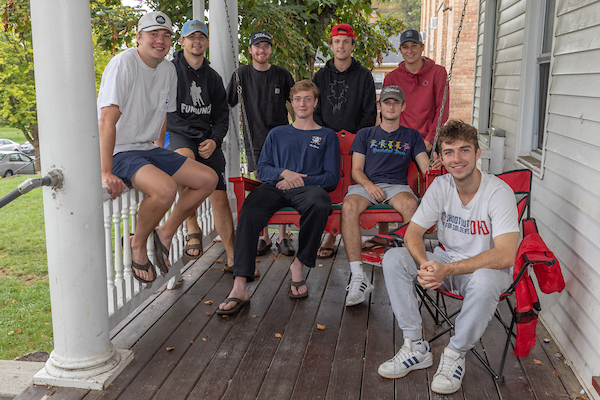 Miami University junior Will Olson suffered a stroke the night of Tuesday, Sept. 7, while relaxing with friends at their South Campus Avenue house. Thanks to his housemates’ quick actions, Olson was back at school a week later with no sign of mental or physical deficits.

“If they weren’t there, I don’t know how I’d be doing right now,” said Olson, a marketing major who turned 21 during his four days in the intensive care unit at the University of Cincinnati Medical Center.

It all started about 8:30 p.m. after the guys finished dinner and had Spider-Man 2 on the TV — as part of their ongoing Marvel movies binge. Olson and a couple of others went out onto the porch.

“I looked over at James and started to say something to him,” Olson recalled. “Everything that came out of my mouth was pure gibberish and I couldn’t come up with a word to save my life at that point.”

"You don't think 20-year-old and stroke"

James Clifford, a junior finance major, said Olson is a known jokester, so they weren’t sure what to make of it. He asked if he was having a stroke although he didn’t think that was possible at first.

“You don’t think 20-year-old and stroke. It’s not something that goes through your mind,” Clifford said.

They thought he might be dehydrated or possibly ate something during dinner that didn’t agree with him.

They helped their friend inside to sit on the couch. Olson was holding a water bottle but couldn’t open it with his dominant left hand.

Mac Culbertson, a junior finance major, said he also was leaning heavy to his left side.

“James looked over at Will when he was on the couch and really noticed him holding his head, leaning back and forth, not doing too well. He asked if he was OK, and that’s when all of our attention really got directed to him, and we started to realize something isn’t right.”

They took him to his bedroom to lie down. Patrick Miles, a junior finance major, was sitting nearby doing homework. Olson told him he couldn’t feel his left side and thought he might be having a stroke. (He said James’s earlier question put the thought in his mind.)

Miles came out and said they needed to take Olson to the hospital, so they jumped in his vehicle and headed to nearby McCullough-Hyde Memorial Hospital. When they arrived, they wheeled him into the emergency room and told the personnel Olson was having a stroke.

From the hospital, they called Olson’s younger brother, Sam, a first-year student at Miami, who called his mother in Westerville, Ohio.

“I was scared. I just lost my husband two years ago, and I didn’t want to have to lose him as well,” said Beth Olson, who drove to U.C. Medical Center with her son, Nick (Miami ’21). Olson had been flown to U.C. Medical Center by LifeFlight helicopter after doctors at McCullough-Hyde and U.C. connected and determined he had a clot in his brain.

“When he left McCullough-Hyde, he had some use of his left side and could speak, but once the helicopter landed at U.C., he was almost the highest number you could get on the stroke scale: He had flaccid (paralysis),” she said. The surgeon gave her a 50 percent chance of her son moving independently. They took him immediately to surgery after Beth Olson gave her approval while they were still on the road to Cincinnati.

“I had three doctors calling me the whole way, looking at scans and being a little more detailed about what they thought he was experiencing and what they may do,” she said.

“That worked. It was successful,” she said. “I was crying. Nick and I both were.”

"It was all about timing"

Olson turned 21 in the ICU as he underwent final tests to make sure there were no other clots. He was released Saturday, Sept. 11, and was back in classes that Monday. “He has full use of all of his extremities,” Beth Olson said in a phone interview from his hospital room on Sept. 10 because she wanted to give credit to her son’s housemates she believes helped saved his life.

Olson’s doctors also were impressed by his speedy recovery.

“They just said ‘you had somebody looking out for you. You should not be doing this right now.’ It was all about timing,” she said.

Beth Olson believes her late husband, Mark, who died from cancer in 2019, was watching over their son.

“I think he had something to do with this,” she said, choking back tears on the phone.

Doctors discovered Will Olson had an undetected heart issue known as a patent foramen ovale (PFO,) a small opening between the two upper chambers of the heart that was there since birth. They believe that caused the stroke. He’ll have surgery to correct the issue over winter break.

As Olson and his housemates gathered on the porch recently to talk about what happened, they were grateful to have their friend back. They all downplayed their actions, with someone calling it “a good team effort.”

As for Olson, he said he’s feeling 100 percent. “I can do everything I used to be able to do prior to that.”

He even felt well enough to play golf with his friends the day after he returned to classes — one week to the day of his stroke. The fun trash-talking and humor have returned, too, as was clear when someone teased Olson about his golf game.