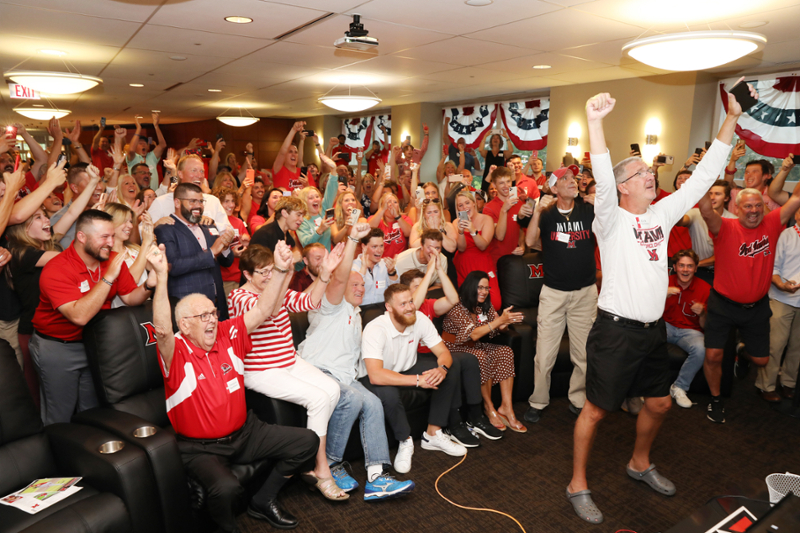 Sam Bachman, family and friends, react to the Los Angeles Angels selecting him ninth overall during an MLB Draft Party at Miami University.

Miami University junior right-hand pitcher Sam Bachman was selected ninth overall by the Los Angeles Angels on Sunday evening in the 2021 Major League Baseball Draft. Bachman becomes the first RedHawk to be selected in the first round of the MLB Draft in school history and is the highest Miami student-athlete drafted since basketball player Wally Szczerbiak was picked sixth in 1999.

"I didn't think I was going to tear up, but instead I cried," Bachman said. "It hit me really hard, and I am just grateful and ready to get to work."

The Fishers, Ind., native went 4-4 in 2021 in 12 starts, recording a 1.81 earned-run average. He finished the year with 93 strikeouts in 59.2 innings, clocking a fastball that routinely surpassed 100 mph. The first-team All-MAC performer allowed a .147 batting average against and finished the year with a .77 WHIP (walks+hits/innings pitched), second-best in the nation.

"The first day I stepped on campus I could just tell Miami was fully vested in baseball and knew this was going to be the place for me," Bachman said. "I'm blessed to represent Miami and wouldn't have it any other way."

Bachman finished his RedHawks' career with a 12-7 record, recording a 3.06 ERA, while striking out 199 batters in 159 innings pitched. He was named a Freshman All-American and the MAC Freshman of the Year in 2019.

"It was a flood of emotions for me, and I can only imagine what it was like for Sam," Head Coach Danny Hayden said. "I had a four-and-a-half year relationship flash past me in a few seconds (when his name appeared on the screen). He is going to be the easiest kid to root for and has been an absolute pleasure to coach and be around. I can't wait for the next chapter, but, however it plays out, Sam is going to do it with a lot of character and pride.

"Sam has a lot of great people in his life helping him with his pitching but what separates him is he is more disciplined than 99.9% of the population," Hayden continued. "He is willing to sacrifice things other people are not willing to do. Sam takes himself seriously as a baseball player. That is why he was able to enjoy this night, this moment." 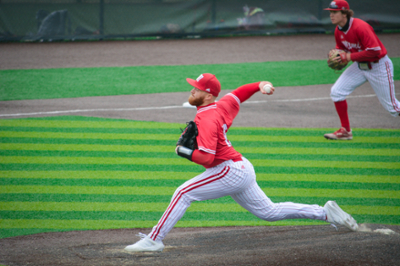 Sam Bachman's fastball was routinely clocked at 100+ mph while he wore a Miami uniform.