Oxford and Beyond • Campus Life

Several years of work led by Miami University's Truth and Reconciliation Project culminated with a narrative historic marker that is now a permanent fixture in the City of Oxford. 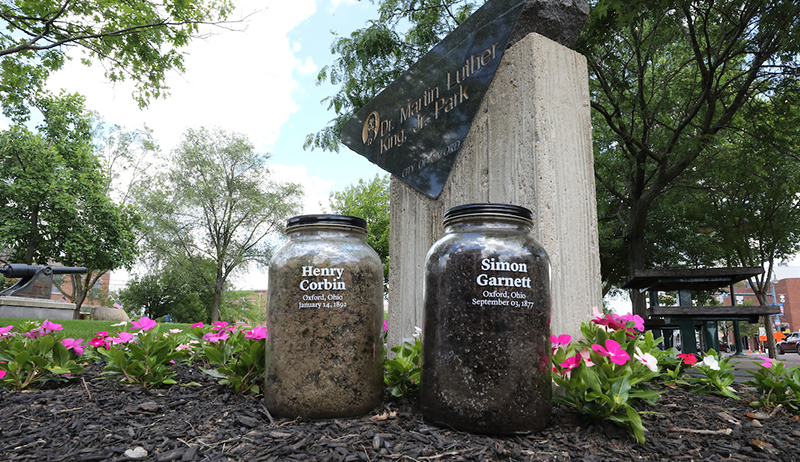 Soil collected in 2019 from the lynching sites join jars from across the nation at the Equal Justice Initiative's Legacy Museum in Alabama.
Oxford and Beyond • Campus Life

Several years of work led by Miami University’s Truth and Reconciliation Project culminated with a narrative historic marker that is now a permanent fixture in the City of Oxford. An unveiling ceremony will be held at 9 a.m. Monday, June 21, in the Dr. Martin Luther King, Jr. Park uptown.

The event is free and open to the public. Follow COVID guidelines from the Centers for Disease Control and the City of Oxford.

The marker describes the deaths of Henry Corbin (Jan. 14, 1892) and Simeon Garnet (Sept. 3, 1877), who were among more than 4,000 African Americans subjected to mob violence and lynching across the United States during the reconstruction period after the Civil War (1865-1950). Corbin and Garnet, both of Butler County, specifically Oxford, were among 15 people known to have died by racial terror lynching in Ohio.

Following the Civil War, resistance to equal rights for African Americans and an ideology of white supremacy led to fatal violence against Black women, men, and children. Lynching emerged as the most public and notorious form of racial terrorism, intended to intimidate Black people and reinforce racial hierarchy, white supremacy, and segregation.

To create greater awareness and understanding about racial terror lynchings, the national Equal Justice Initiative works with communities to erect historic markers and monuments in these spaces. Miami’s Graduate School and Department of Family Science and Social Work created a seminar course, Truth and Reconciliation Project, to promote the national initiative as it relates to southwest Ohio.

“The broader vision for Miami’s Truth and Reconciliation Project is a continued focus on the work that remains left to be done in advancing truth and reconciliation around race in America and honestly confronting the legacy of slavery, lynching and segregation,” said Anthony James, associate professor and director of the Family Science Program.

Students investigated the lynchings of Corbin and Garnet and also collected soil from the lynching sites, which are now at the Equal Justice Initiative’s Legacy Museum in Montgomery, Alabama, where jars from across the nation are exhibited. (Note: the jar of soil labeled “Simon Garnett” was based on the spelling of his name from the original research conducted. Further investigation confirmed the spelling of his name as Simeon Garnet.)

Students, along with coalition members from Miami’s project, also worked with Oxford’s City Council, which adopted Resolution No. 7268 in March 2021 authorizing the placement of the historic marker in Dr. Martin Luther King, Jr. Park.

The families of Corbin and Garnet will be honored during the ceremony. Speakers will include representatives from various organizations who worked on the project, including Miami’s graduate students.

During the 19th century, white mobs in Oxford lynched at least two Black men after kidnapping them from the old Town Hall Jail that stood near this site. In September 1877, a white mob stormed the jail to lynch a Black man named Simeon Garnet. Without serious investigation, Mr. Garnet had been presumed guilty of assaulting a white woman. A mob led by the woman’s husband broke into the jail on September 2 and shot Mr. Garnet, who managed to survive. Upon learning that Mr. Garnet was alive, the mob attacked the jail again on September 3, shot Mr. Garnet at close range, and dragged him outside the jail, where he was left to die. On January 14, 1892, a white mob abducted Henry Corbin, a young Black man, from the jail to lynch him. Mr. Corbin’s employer, a white woman, had been found dead in her home on January 5. A mob quickly formed when the woman’s daughter accused Mr. Corbin of the killing. Mr. Corbin’s family maintained that the accusation was false and that the daughter had implicated him to hide her own involvement in the crime. Mr. Corbin was captured after being wounded and was brought to the jail; but the mob seized Mr. Corbin from his cell, hanged him from a tree, and shot him over 400 times. Local officers failed to prevent either lynching, which terrorized Oxford’s Black community. In the end, no mob participants were held accountable for the lynchings of Simeon Garnet and Henry Corbin. --- From Miami’s Truth and Reconciliation Project.