Thousands to enjoy a “Miami experience” this summer

More than 5,000 youths and adults are expected to participate on Miami University’s Oxford campus this summer in a variety of educational programs, athletic camps, conferences, and other events.

Thousands to enjoy a “Miami experience” this summer

This Sunday, more than 650 high school juniors will arrive for Buckeye Boys State. Approximately 700 youths will attend hockey school sessions in June and July, and about 330 high school students will attend the Summer Scholars Program. 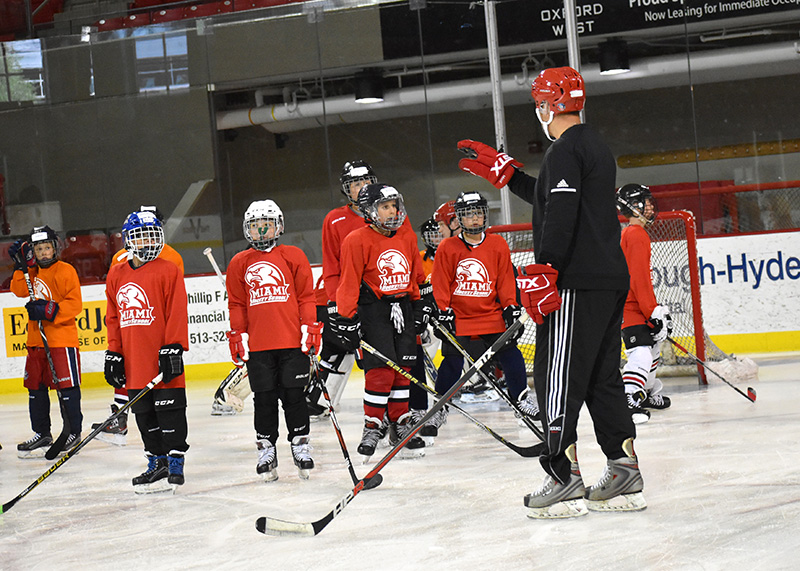 Miami will host about 700 youth hockey players this summer at Goggin Ice Center.

It’s another strong indicator that things are beginning to return to normal after the summer of 2020 when no in-person conferences or camps were held on campus, said Paula Green, Miami’s associate director for conferences.

“The summer will look different, with no face-to-face Orientation sessions or Alumni Weekend, but many university departments and external clients have been working diligently to return to campus this summer,” she said.

The focus remains on safety.

Green said a Lean committee — led by Alicia Rizzo of event services and comprised of representatives from university departments who welcome groups to campus in the summer — established procedures for the safe return, making necessary adjustments as restrictions have lifted across the state and lightened on campus.

Jonika Moore (Miami ‘01), senior associate director of Admission who co-leads the Summer Scholars Program with colleague Jane Lee, said they will be following university protocols for the two-week summer experience for high-achieving high school students who will be juniors or seniors in the fall.

They also instituted additional safety measures to allow for the comfort of families to send their students, she said. Those include staggered move-in and orientation times and breaking up evening group events into smaller groups.

“Having the opportunity to engage with the participants in person is the heart of the Miami experience,” Moore said. “From the participant response, they are eager to experience Miami live and in living color as well.” 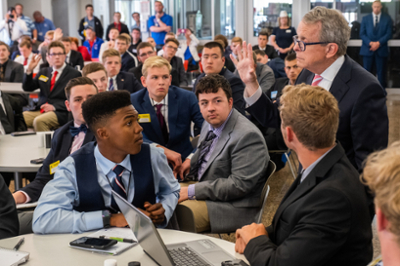 Gov. Mike DeWine spoke to delegates of Buckeye Boys State at Miami in 2019.

Buckeye Boys State sponsored by the Ohio American Legion will be in Oxford from June 13-20. High school juniors from across the state will learn about city, county and state government through a nonpartisan, objective educational approach.

Christie White, program coordinator for Buckeye Boys State, said they’re excited to be back after last year’s program was canceled due to the pandemic and no online option was deemed a feasible substitute. All registered 2020 delegates were invited to attend this year’s program and a few have decided to do so.

“Being on campus is like a second home to us during the summer,” White said.

Enrollment for this year’s program was limited to 672 students, down from the usual 1,200.

All Buckeye Boys State staff and students are being asked to provide proof of vaccination or a negative COVID-19 test on arrival “and, in particular, we lowered enrollment to be able to conduct dining and certain larger group program pieces as safely as possible,” said Stephen Oechsle, a Buckeye Boys State spokesman.

About three dozen RedHawk summer camps will take place on campus in June and July, including instructional camps in several sports such as  hockey, figure skating, tennis, volleyball, basketball, softball and cross country. 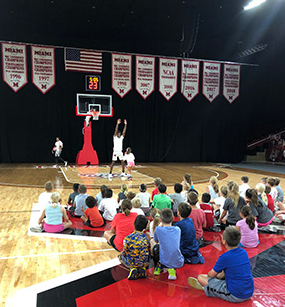 Tori Irvin, assistant director of sport and facility services for Miami athletics, said they’ve seen the number of participants signed up for some camps double and triple in size.

“It’s nice to have kids in the community back on campus,” she said.

The first basketball camps got underway this week at Miami’s recreation sports center. Miami athletics also is renting the basketball court at nearby Talawanda High School because Millett Hall will be occupied by Buckeye Boys State. Participants in some overnight camps, such as field hockey, volleyball and tennis, will live in residence halls and dine on campus.

Mike Norton, director of hockey at the Goggin Ice Center, said they have made significant modifications for their six planned hockey school sessions for male and female players ranging in age from 8 to 18. The first camp starts next week.

They’ll open all the locker rooms in Goggin and limit the number of players using each to 10 instead of the usual 20. And there will be plenty of disinfecting going on beyond what was done in the past, he noted.

“It feels good to be back at it,” he said of the hockey schools being back on the ice.