View a one-minute video of highlights from the ceremony.

On May 18, Miami University unveiled a statue of NBA executive and basketball icon Wayne Embry (Miami ’58). The university also presented Embry and his late wife, Theresa “Terri” Embry (Miami ’60), with the Freedom Summer of ’64 Award, which is bestowed each year upon a distinguished leader who has inspired the nation to advance civil rights and social justice.

See more photos and videos from the ceremony on Miami’s Photoshelter page here and YouTube.

The Freedom Summer of '64 Award honors the Embrys’ lifetime of commitment to social justice, for breaking racial barriers and for their mentorship.

“Over the last year, our nation has undergone tremendous reckoning on issues of racism, social justice, equity, equality and inclusion. Those of us who fight for change today, stand on the shoulders of the great women and men like Terri and Wayne Embry, who were on the front lines of the civil rights movement in the 1960s,” Miami President Gregory Crawford said. “Advocating for racial justice and equality is never a linear path. It is never easy, popular or safe, but it is always necessary ... We honor the Embrys today for their strength, their courage and their lifelong dedication to civil rights, equity and equality.”

As he accepted the award, Embry spoke of Terri, his wife of 62 years, and her advocacy work.

“I’m only the recipient of about 25 percent of this award. The other 75 percent goes to my beloved wife, Terri,” Embry said. “Because she’s the one who was an advocate for change, from her high school days to her days at Miami … She was a great mentor to a lot of young people. She was a great advocate of change.”

The new statue, which stands at the south entrance of Millett Hall, the basketball arena, captures Embry’s likeness and signature hook shot. Private donations funded creation of the statue and a Wayne Embry Scholarship, which will support Miami varsity men’s basketball student-athletes. Embry said he is humbled by the honor and hopes he will inspire future Miamians.

“I came to Miami University and fell in love with the place and still am,” Embry said. “Love and Honor.”

Miami stories on the Embrys and Freedom Summer of ‘64 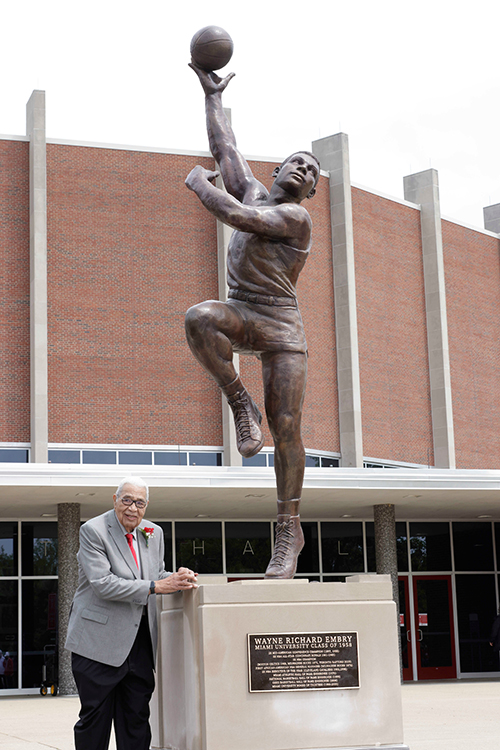 Embry poses with the statue in front of Millett Hall.