We caught up with Peyton for a Q-and-A about her shot at the buzzer and making No. 5 on ESPN’s highlight reel. 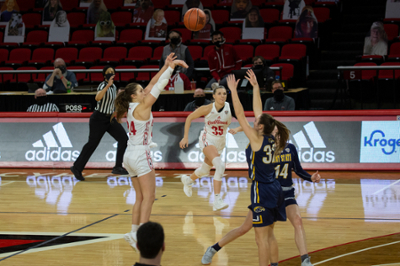 The highlight came after No. 24 was honored two weeks earlier as Mid-American Conference Player of the Week for scoring 71 points in a two-game stretch — tying an all-time record for the RedHawks.

We caught up with Scott for a Q-and-A about her shot at the buzzer and making No. 5 on ESPN’s highlight reel.

That was a heck of a shot. Take us back to that moment on the court as the clock counted down.

Thank you! Coming out of the huddle I was joking with my senior teammate, Kelly McLaughlin, about wanting to give her and the other seniors a more dramatic exit with this being their last home game in Millett. I was confident in the play our head coach (DeUnna Hendrix) had drawn up.

When the ball was inbounded, my defender had tried to steal it, which gave me an open shot when I turned around and looked at the basket. Without thinking, I took another dribble and shot it. When it went in, I paused for a second, then ran straight to our bench and celebrated with my team. Overall, it was a pretty surreal moment.

How did you learn it was No. 5 on SportsCenter’s Top 10 highlights?

My assistant coach, Hailey Yohn, had sent me a message the morning of as well as some people in my support system from back home. 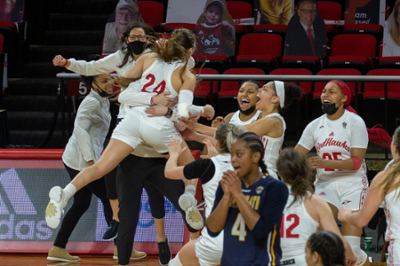 Scott celebrates the victory with her team (photo by Scott Kissell).

Is that the kind of shot you’ve dreamed about making since you were a kid?

I don’t think I could have dreamed of this one but, yes, always something you jokingly practice when you’re shooting around, counting down 3,2,1 then chucking up an acrobatic shot. I’ve been practicing that for a while, haha!

When did you start playing basketball?

I started playing in an instructional league when I was 5 and have been playing ever since.

As a Sport Leadership and Management (SLAM) major, what career would you like to pursue after you graduate?

I know I want to stay around sports, and coaching has started to intrigue me a lot. However, there is no one career I am heavily pursuing after I graduate.