Newton: a Q-and-A with Renate Crawford about the new pup on campus

President Greg and Dr. Renate Crawford recently added a new puppy to their pack. We touched base with Renate Crawford, Miami’s ambassador and adjunct professor of physics, to find out more about Newton.

Newton: a Q-and-A with Renate Crawford about the new pup on campus 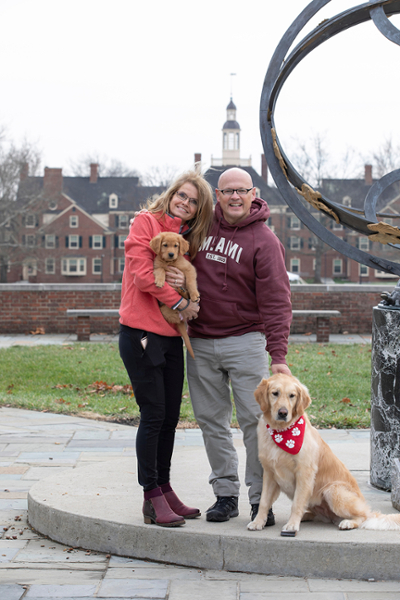 The Crawfords with Ivy and Newton (photo by Jeff Sabo.)

Tell us how you and the president came up with the name.

I liked the idea of naming him after a famous physicist or something related to physics since Greg and I are both physicists. 'Newton' is perfect for this dog. He has an incredible innate curiosity about nature — he wants to explore everything just like Sir Isaac Newton. Like any puppy, he’s also evidence that a body in motion tends to remain in motion!

Can you provide any details on his background and why this was a good time to add a new puppy to your pack?

We have always expected to get a second friend. Ivy recently turned four years old, so it was time. Newton joined the family right before Thanksgiving, so we had a few holiday weeks to focus on his training.

How is he getting along with Ivy?

They have been great since the first day they met. They do wrestle and engage in tug-of-war, sometimes a little too much. Ivy really seems to enjoy having Newton around — it boosts her own energy level.

I bet he's been growing quickly. How much does he weigh now?

Growing quickly is an understatement. Before Thanksgiving, he was nine pounds; now he is over 32 lbs.

What is it about the golden retriever breed that you all love? 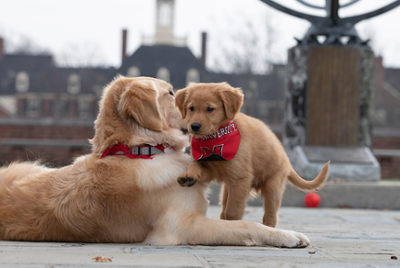 Ivy and Newton have gotten along well since day one (photo by Jeff Sabo.)

We have had golden retrievers for about 30 years now — Newton is our fourth one. They are great with children and very family-oriented dogs. For a university campus, Ivy has been great and always enthusiastic to make friends with Miami students. Newton can’t wait to join her on campus and meet all of our wonderful students.

Anything else you would like to say about him?

It was very quiet over break, so Newton hasn’t had a chance to meet too many students yet. He did meet several of our student-athletes on the volleyball team the other day. Newton is going to be a big RedHawk volleyball fan for sure!

You’re often seen out running with Ivy. Will it be just a matter of time before we see you out there with Newton, too?

I hope so. Ivy is a very good running partner. We really enjoy our (often early) campus runs or excursions to Hueston Woods. We will see whether Newton is such an athlete when he gets older. He will need to be about two years old before he can go on longer runs. Right now, he is content to just chase balls with Ivy. She is certainly training him to be a good runner.